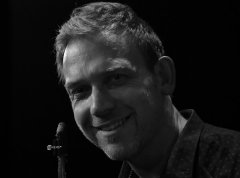 Saxophonist, clarinettist and composer Rob Hall has forged a highly individual path in music, consistently producing engaging, expressive and exploratory work that straddles genres. Tours, performances, recordings and broadcasts have taken him across the UK from Shetland to Penzance, and abroad to countries in four continents. Broadcasts, both recorded and live, have included BBC Radio2, BBC Radio3, JazzFM, BBC Scotland & BBC TV.

Rob's own CD releases are on the FMR contemporary music label numbering nine to date. His debut CD Open Up in 1997, featuring guitarist Jim Mullen, attracted excellent reviews, soon followed by Heading North with his London based touring quartet, preceding his own move to Scotland in 1999. In 2001 Rob was commissioned by the Highland Festival to write a performance piece A Highland Canvas in collaboration with visual artists John McGeogh (video) and James Hawkins (artist). This multi-media project received support from the Royal Scottish Conservatoire as did Rob’s third CD Free-world Music with his group Freewheelers, released in July 2002.

2005 saw the release of The Beaten Path with what has developed into a long and fruitful duo partnership with Scottish pianist and composer Chick Lyall spawning a further five CD recordings on FMR. 2010 saw the premiere of Borderland a large scale commission for big band. In 2011 Scottish Jazz Expo promoted Rob Hall & Chick Lyall internationally at jazz festivals in Italy and Edinburgh where they released their CD Blithe Spirit. The Vine & the Fig Tree commissioned by the Devon based choral group eXe Singers premiered on Remembrance Day in Nov 2011. Chronicles by Rob Hall & Chick Lyall was released in Aug 2013 introducing live electronics and bass clarinet into the duo's compass, and the pair followed this by returning to an acoustic piano & clarinets album Myth in 2016 featuring a suite of 12 miniatures by the Greek composer Giannis Konstantinidis. The duo broadened the scope and instrumentation of their work with electronics incorporating wind synth and baritone sax on their 2020 release Upward Fall.

Rob has been at the forefront of the UK gospel music scene, regularly performing and recording in major venues such as Usher Hall Edinburgh and Waterfront Belfast. He has appeared with Praise Gathering, New Scottish Arts, Keith & Christine Getty, Dave Pope, Graham Kendrick, Gamu Nenghu, Beverley Trotman, Onaje Jefferson and he has contributed session work on recordings and for producers such as Graeme Duffin.

An active composer, he has written music and undertaken commissions for large and small ensembles and solo works both in classical and jazz genres with many performances and recordings. These include works for choirs, chamber orchestra, jazz orchestra, and numerous compositions for small jazz ensembles. His music has been performed in such venues as London's Royal Festival Hall and the Barbican , Glasgow Royal Concert Hall and RNCM Concert Hall Manchester.

Spartan Press published Rob's first book Eight Escapes for Piano in 2015 with a follow up Eleven More Escapes for Piano in 2016. Eighteen Easy Escapes completed the series in 2017 from which an arrangement has been included in the ABRSM Piano (Grade 3) 2021-22 syllabus. A commission from ABRSM received worldwide publication in ABRSM Piano Exam Pieces (Grade 1) 2017-18 selling over 140,000 copies. Forthcoming clarinet and saxophone publications are due in 2020-21 with Brasswind and Forton Music.

As an educator Rob has extensive mentoring and coaching experience with all sectors from Primary level through to Higher and Adult education. He runs his own teaching practice The Music Workshop and his tireless commitment to jazz education over more than three decades has benefited hundreds of aspiring and professional musicians. For 10 years he ran programmes through his company Jazz Course UK including residential summer schools.

As an ABRSM examiner in both jazz and classical disciplines Rob has toured extensively in the UK, Ireland, Hong Kong, Malaysia, Indonesia, India, Arab States, New Zealand, Turkey & China. He has adjudicated for festivals, acted as specialist examiner at the RCS and presented CPD training courses for many music organisations.

Born in 1969 into a musical family he spent his early years in Kent where he took up recorder, piano and clarinet, and later in Essex where he added classical guitar. After a four year period playing clarinet with the Essex Youth Orchestra he went on to study classical music and performance at Manchester University and the Royal Northern College of Music jointly, gaining a degree and two diplomas.
It was here that Rob's interests in contemporary  music and composition began to flourish, whilst studying clarinet with John Reynolds, composition with Geoff Poole and jazz saxophone with Gary Cox. In his first term his carol Christe Redemptor Omnium won a competition judged by Scottish composer James MacMillan. He then twice received the Proctor-Gregg Composition Award as well as a Terence Greaves Award for Big Band Writing.
He continued his studies for one year as a scholarship student at Berklee College of Music in the USA, where he became a part-time tutor in music harmony before returning to the UK.

Rob lives in central Scotland with his wife Abi and their three children.